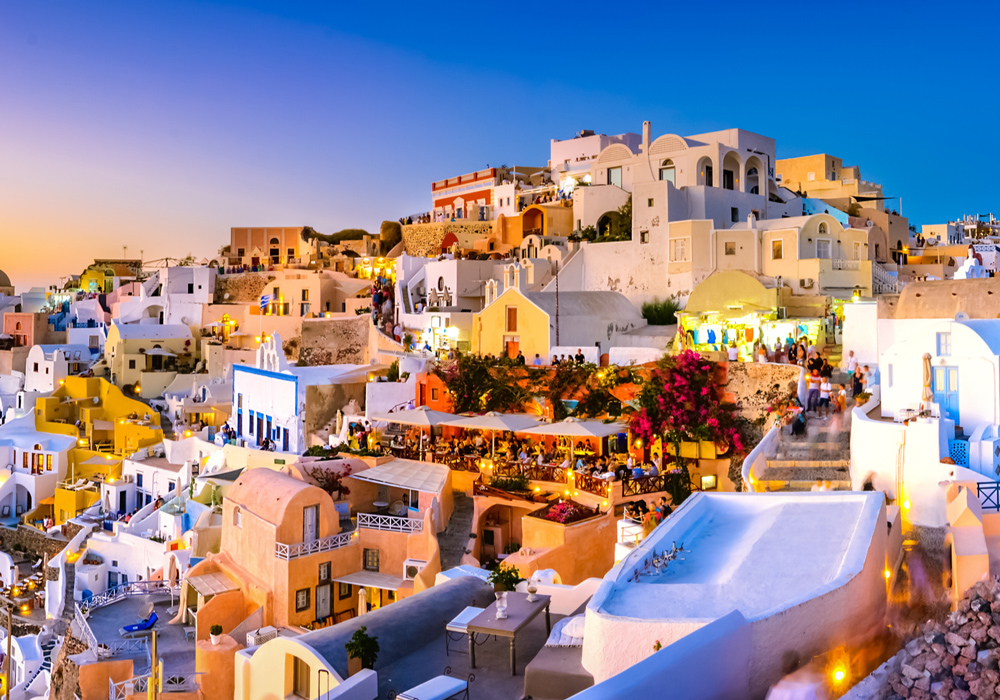 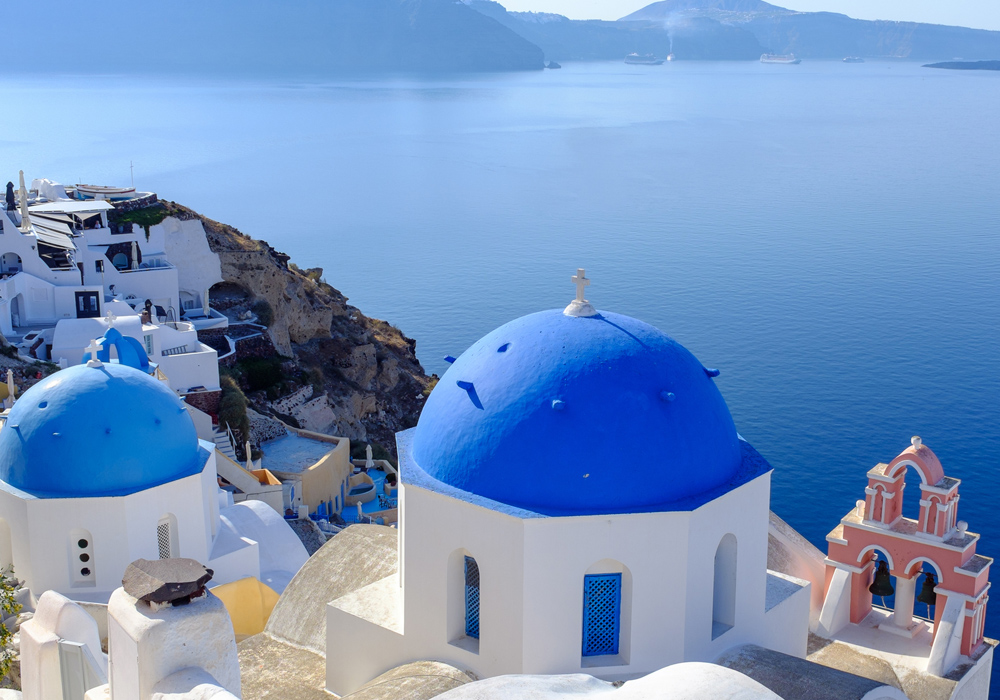 The Black Pearl of the Aegean

One of the best Greek islands, the most sought after place for a romantic getaway in Greece.
Here the traveler can discover a wealth of elegant boutique hotels, stunning sunsets and dramatic vistas.

The island has a growing reputation as a “wedding destination” for couples not only from Greece but from all over the world. A trip to Santorini with the other half is a dream for anyone who has seen at least one photo of the island’s famous Caldera and exchanging kisses beneath Santorini’s famous sunset is the ultimate romantic experience!
The Santorini Caldera, a site of fascinating beauty that developed after a volcanic explosion in the 2nd millennium BC, will certainly enchant you with its white-washed houses literally hanging from the multi-colored cliffs. The villages of Oia, Fira, Imerovigli and Pirgos provide the ideal setting for an unforgettable Greek islands vacation or Santorini honeymoon.

In the Bronze Age, the island was a flourishing trading center inhabited by a sophisticated society. In the late 17th century BC, a massive volcanic eruption collapsed half of the island and buried its main town in a thick layer of ash and pumice, preserving its houses, streets and squares as they existed 3,700 years ago. Today the site, called Akrotiri, is one of the world’s most important archaeological sites. We will visit Akrotiri upon arrival, and also have time to explore Phira and marvel at the incredible views. Lunch at a restaurant specializing in the cuisine of the island.

The villages of Oia, Fira, Imerovigli and Pirgos provide the ideal setting for an unforgettable Greek islands vacation or Santorini honeymoon.

Surprisingly, the volcanic soil has proven to be good for growing grapes and tomatoes.

Today there are ten wineries on the island, which all boast of their distinctive “terroir” (rocky volcanic soil, little water) which they attribute to the volcanic explosion around 1600 BC.
Oia is even prettier than Thira, with a classier range of shops, galleries and restaurants.

That about does it for cultural courses on Santorini, but there are numerous churches, both Roman Catholic and Greek Orthodox, scattered throughout the island that will repay even a casual stopover. The island is so small–barely 10 miles from one end to the other–that one could easily take in its sights in a day, including the fine Byzantine church at Episkopi and the monastery outside Pyrgos on the highest point on the island.

Several beaches are along the eastern coast, from the Red Beach near Akrotiri, up to Perissa and Kamari, then north to Monolithos, and farther north to Koloumbos and Baxedes (it should be said that these beaches are mostly composed of volcanic sand that can get very hot in July and August). There is no end of restaurants, with most of the classier ones concentrated in Fira Town.

Route 1: Explore the Capital of Fira, Firostefani, and Imerovigli

The spectacular town of Fira blends in perfectly with the deep blue sea and the small volcanic islands that form the renowned Caldera, the much photographed volcanic basin of Santorini. Walking around the narrow streets of Fira among white walls and colorful shops is something you must not miss. Under the wild cliffs that host Fira is the old harbor from where you can catch the boat to visit Nea Kameni. We highly recommend that you visit this volcano island for a chance to take a once-in-a-lifetime walk around its crater. You can go to the harbor either by the cable car (teleferique), on foot, or by a more unusual but traditional way–riding one of the island’s remaining mules or donkeys! Of course you could instead enjoy the famous sunset of the Aegean at one of the many bars or restaurants of Fira that offer a fabulous view of the caldera!

Other beautiful sunset spots can be found in the town of Imerovigli, which literally means “the day watch.” Imerovigli is an approximate 30-minute walk following the traditional old path through the outskirts of Fira and the town of Firostefani. En route to Imerovigli you will see the Catholic Cathedral and interesting Dominican monastery of Santa Ekaterina, built in 1596, and when you arrive you may spend your time exploring the Frankish past of the island. At the location called Skaros, just outside Imerovigli, you can see the ruins of a medieval settlement, the first settlement the Franks built when they came to Santorini. It was in this castle of Skaros that the Venetians raised their flag and renamed the island from its original ancient name of Thira to Santa Irene. This later became abbreviated to Santorini–just a bit more history to share with your friends back home!

Another great town, about two miles (three kilometers) south of Fira that you might like to visit is the traditional village of Vourvoulos. Here you will find great tavernas and restaurants for a Greek-style meal, and may also swim at some of the fine sandy beaches of Santorini–Vourvoulos and Xeropigado.

Route 2: Exploring the Village of Oia

The northern part of the island is dominated by one of the most famous and beautiful villages of Greece, Oia. Although Fira draws most of the island’s visitors and has the ultimate cosmopolitan atmosphere, Oia boasts the best view of the island and caldera, and is the place for more quiet moments. Sunsets here are truly magical and visitors attest that the most spectacular and breathtaking sunset can be seen from the medieval ruins of Oia, at the location called Goulas (don’t go there without enough space in your digital memory card!). Traditional Cycladic architecture is at its finest in Oia. You can spend what seems like an infinite amount of time walking among the small white houses and sparkling blue domes of the uncountable little churches, many of which are built deep in the volcanic soil–these are the famous yposcafa, literally “built underground”. Among the typical traditional houses you may also see the mariners’ mansions built in the late 19th century with strong characteristics of neoclassical architecture.

As you walk through the narrow paths, you cannot help but notice the many galleries that make Oia a very much alive cultural center not only to its visitors, but also to the many artists who live and create in this beautiful village. Under the cliff of Oia you are able to swim at the small and picturesque beaches of Ammoudi and Armeni. Other larger yet less crowded beaches can be found at the northern edge of the island close to the small traditional settlements of Tholos and Finikia. The beaches of Koloumbos, Baxedes, and Pori, covered with sand and sparkling pebbles will surely enchant you.

Although you will likely spend most of your time in the famous villages of Fira, Oia Imerovigli, and Firostefani, all built on the edge of the cliff, there are other just as beautiful sites and interesting villages spread over the central and eastern part of the island. Among the tomato fields, gardens and small green hills, between the towns of Messaria and Megalochori, you will find Santorini’s famous vineyards. The old Santorinian wineries are definitely worth the visit. You will have the opportunity to see old wine vaults dug into the soil, called canaves, and learn how wine producers of Santorini have been creating their tasteful products–famous in all of Greece and some even worldwide!

Approximately 2.5 miles (4 kilometers) from Fira you will find the picturesque town of Messaria. This beautiful town is home to the best wines of the island and claims the title of “Queen of the Vineyards!” In Messaria you will also see the post-Byzantine churches of Aghia Irene and Metamorphosis as well as the unique Argiros Mansion, built in 1888–all are interesting sites. From Messaria continue to the small village of Vothonas. Along the way notice the stunning small church built in a cave, but the most interesting religious monument of the area is the Byzantine church of the Virgin Mary in Episkopi Gonias, built in the 11th century by the Byzantine Emperor Alexios Komninos I. Next you may wish to visit the Kamari Beach, one of the best options for a swim on the island, featuring an impressive 1.3-mile (2-kilometer) stretch of sand. From here you can follow the curvy road that takes you up the hill and over Kamari, and then follow the path that leads to the remains of the Dorian city of Ancient Thira. As enjoyable as the site itself is, the view of the eastern coast is spectacular. If for this reason alone, Ancient Thira is definitely worth a visit.

On the southern part of the island you will find Santorini’s most colorful beaches. At cosmopolitan Perissa, which extends to Perivolos, you can dive in the sparkling waters of this black, volcanic, and pebble-covered beach. If you want to step away from it all, you may explore the nearby church of Santa Irene. This church is especially worth visiting if you are on the island on August 29th, when there is a festival in honor of the island’s patron Saint. Near Perissa is the picturesque village of Emporio, where you can see remains of a medieval fortified castle. Another road leads you to Pyrgos, a charming village with many old churches and a Venetian castle. From Pyrgos you can travel to the peak of Profitis Elias, the highest point on the island, where the historical monastery of the same name sits. Built in 1771, it is the proud host of an interesting collection of ecclesiastical articles of priceless value.

Akrotiri is the last village in the southwestern part of the island. Adjacent to the village is where you will find one of the most impressive archaeological sites in Greece, the prehistoric town of Thira, where the excavations that began in 1967 have brought to light a semi-intact old city of the 3rd-2nd millennium BC. Walking around the streets of this prehistoric town and seeing the actual houses is a truly spectacular experience–one you will surely remember for a lifetime (please check that the Akrotiri is open to the public before your visit, since restoration work is still on-going). Near Akrotiri there are some nice and isolated beaches, such as the Red Beach, the White Beach, Mesa Pigadia, and Almira. You can reach them either by boat or on foot following a dirt road. Even if you are not the walking type, it is worth the pleasant hike to enjoy a truly wonderful aspect of Santorini’s nature and landscape. 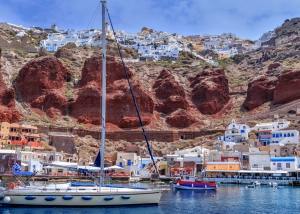